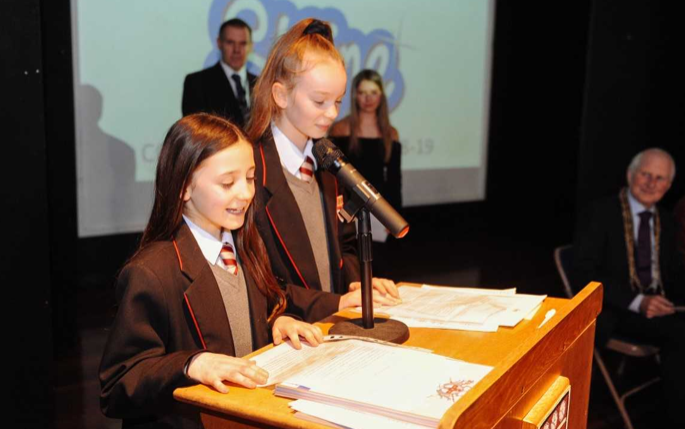 Young volunteers who dedicate their time to work with their peers and help to make the City of York a better place, have been recognised for their contributions at the annual Lord Mayor of York’s Shine Awards.

The event, held at Vale of York Academy, celebrated the contributions of individuals and organisations who work with young people in many different ways. The Right Honourable Lord Mayor of York, Councillor Keith Orrell and the Civic Party were in attendance to congratulate the winners and hand out the certificates.

This was the seventh Lord Mayor’s Shine Awards and the second to be held at Vale of York Academy in partnership with City of York Council.

The Children and Young Peoples Shine Awards were presented to those who dedicate their time to enable others to ‘shine’ in a number of ways. With categories for volunteering, community champions and the arts, children and young people from all over York were recognised for doing amazing work and inspiring others.

A group of deserving adults who give up their time for the benefit of young people in our city, were presented with The Ann McKeown Award for Excellence and Inspirational Work With Children and Young People. Ann’s husband, Geoff McKeown, presented the awards and recited a poem called Mrs McKeown’s Calling, in memory of his late wife who was a long-time supporter of the awards.

The event this year was compered by Tim Waudby, Community and Partnerships Officer for the Local Area Teams, City of York Council and Holly Cairns, Vale of York Academy Alumna and twice a recipient of the awards herself.

Students from Vale of York Academy began the awards with a series of inspirational readings and local singer Elena Whitely provided music during the reception, where the Lord Mayor, Civic Party and VIP guests chatted with recipients of the awards and their families.

Event organiser, Tim Waudby, said “The Shine Awards allow us to really celebrate the incredible work, time and dedication that so many York citizens put in to helping others. The awards exist because we as a community want to celebrate the fantastic contributions which people make for the good of the city’s young people.

“We were delighted to hold the awards ceremony at Vale of York Academy once again. They did an amazing job of hosting the event and everyone was made to feel incredibly welcome.”

Vale of  York Academy Principal, Toby Eastaugh, added “We were honoured to host the Shine Awards for a second time. I never cease to be amazed by the generosity and kindness of individuals who want to make their city a better place.

“I am also very proud of our students who welcomed guests, read beautifully and performed during the event. Thanks also to our past head girl, Holly Cairns, past winner of a Shine Award herself, who came back to help present the Children and Young Peoples Awards.”