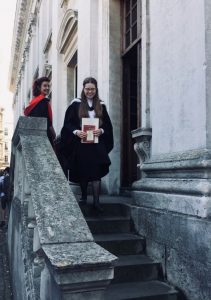 After I left Canon Lee in 2013, I went to York College to study A-Levels in Archaeology, English Literature, Early Modern History and Government and Politics. English was always my favourite subject throughout school, and so on the back of strong results in my first year at York College, I decided to apply to study English at the University of Cambridge (having been first encouraged to apply to Oxbridge in Y11 at Canon Lee). In January 2015 I was lucky enough to receive an offer to study there. Three years later, I graduated with a First with Distinction. Having taken a year out, I am now going to the University of York to study for an MA in Medieval Literatures and Languages and I hope to continue working in academia.

I hope that other pupils will feel able to apply to courses at elite Universities – neither of my parents attended University, and I received a lot of financial support from York College, who paid for the train tickets to my Cambridge interview and for my UCAS application through their bursary system. Once at University I also received the full Cambridge Bursary which is designed not only to make studying in Cambridge affordable, but to level the playing field between more affluent applicants. The only thing Cambridge was interested in an interview was how interested you were in your subject and how hard you were willing to work, regardless of your background, and I’ll always be grateful to everyone at Canon Lee who encouraged that same attitude.