What do our parents say?

We love to hear what our parents and carers think of our school and are always delighted to hear feedback.

Here’s just a few quotes from some parents/carers whose children joined Year 7 in September 2020. 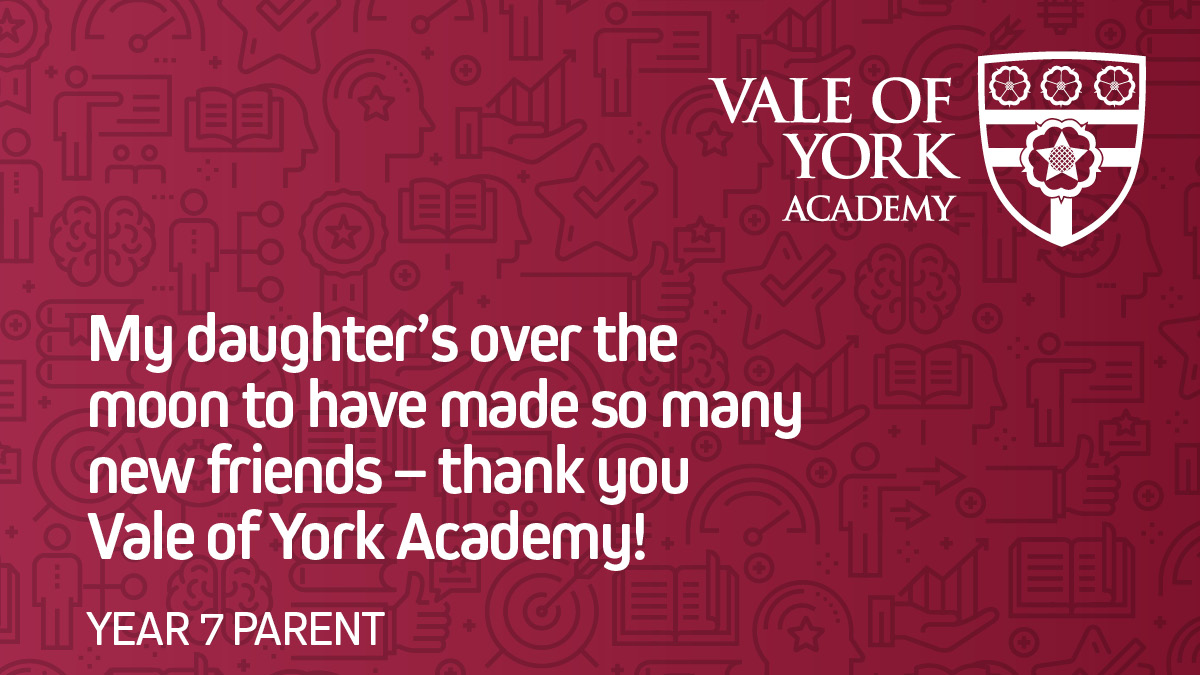 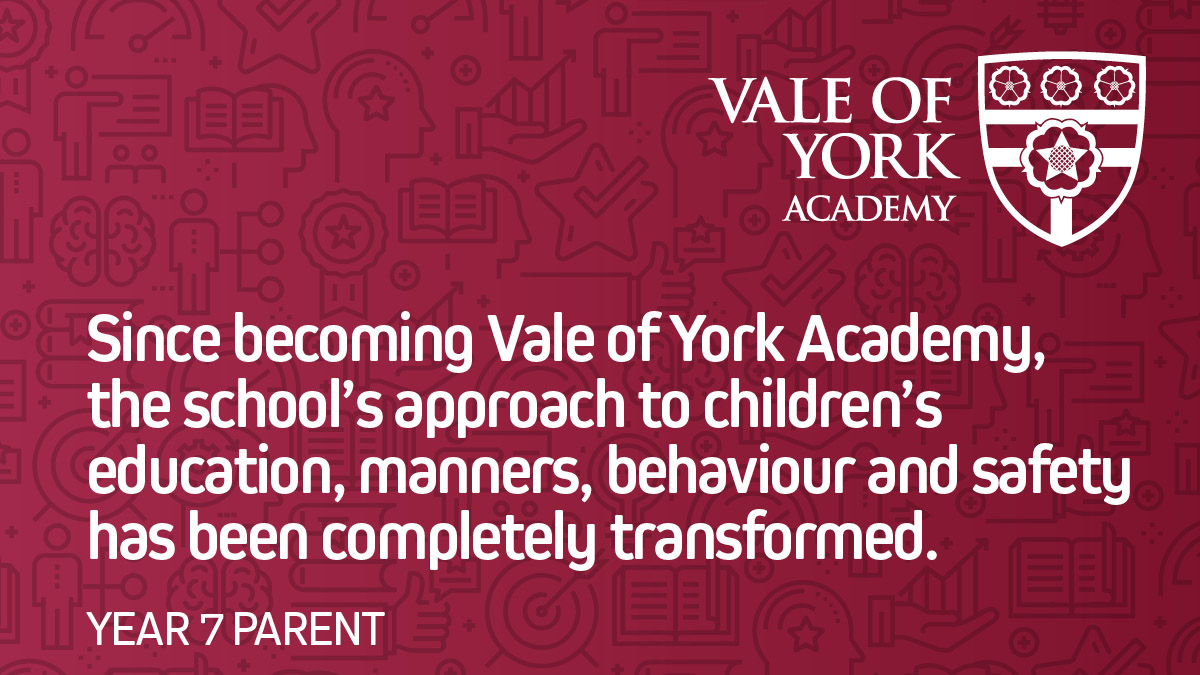 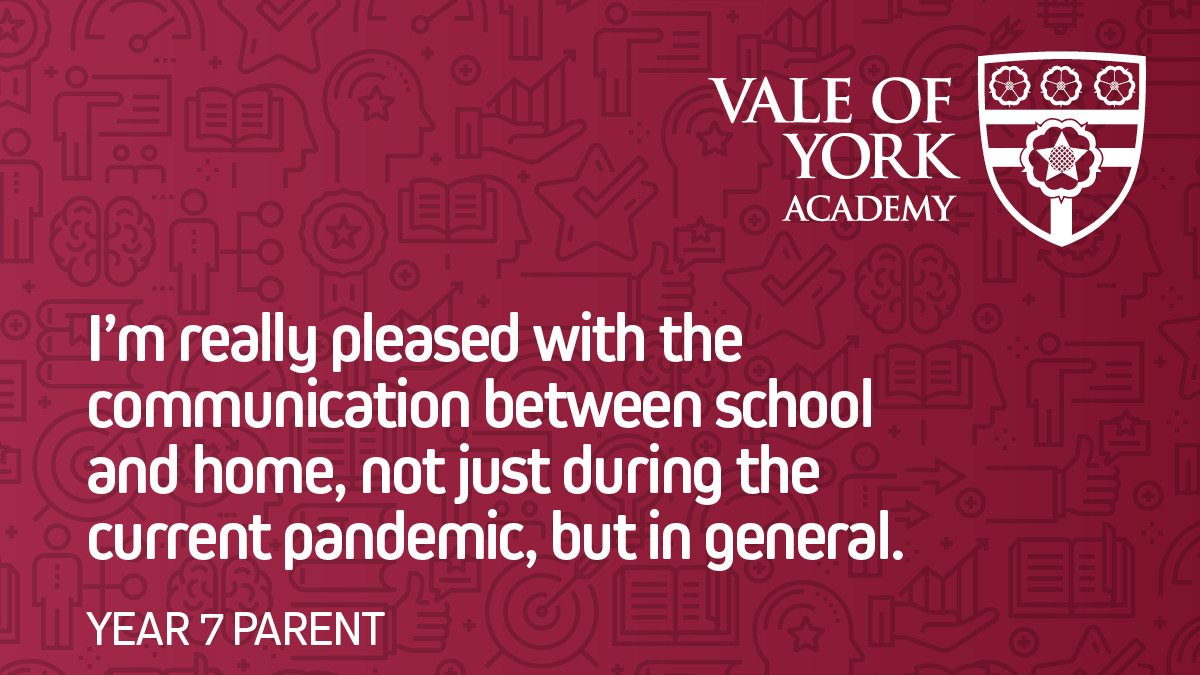 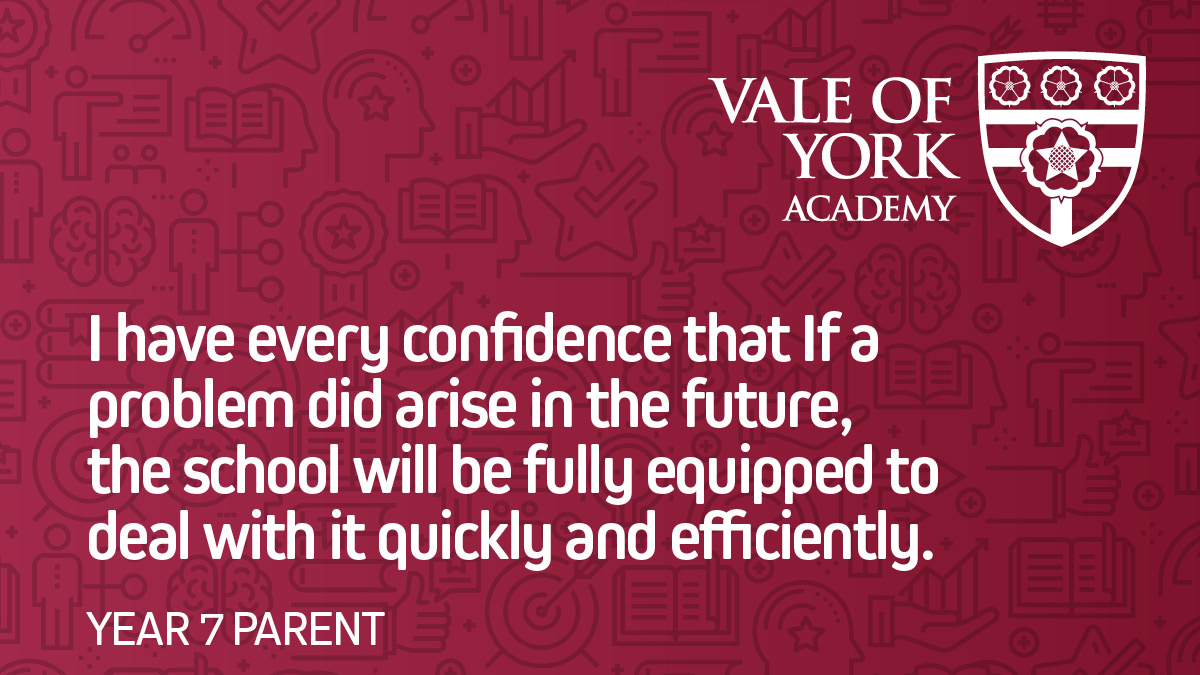 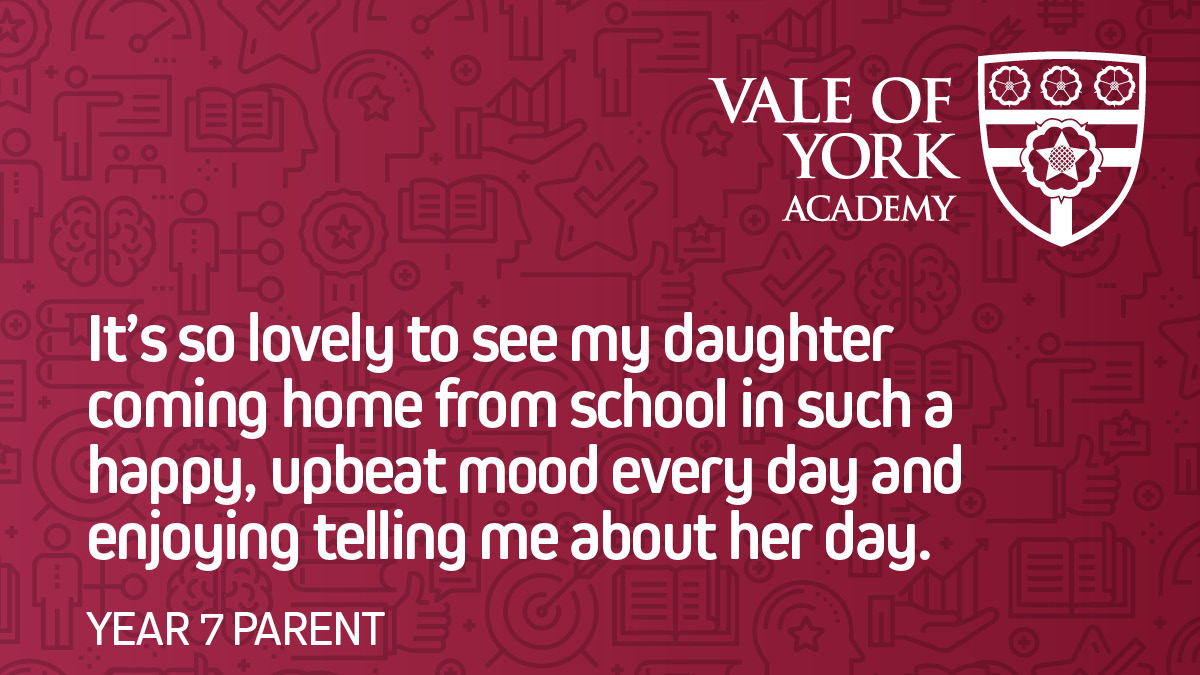 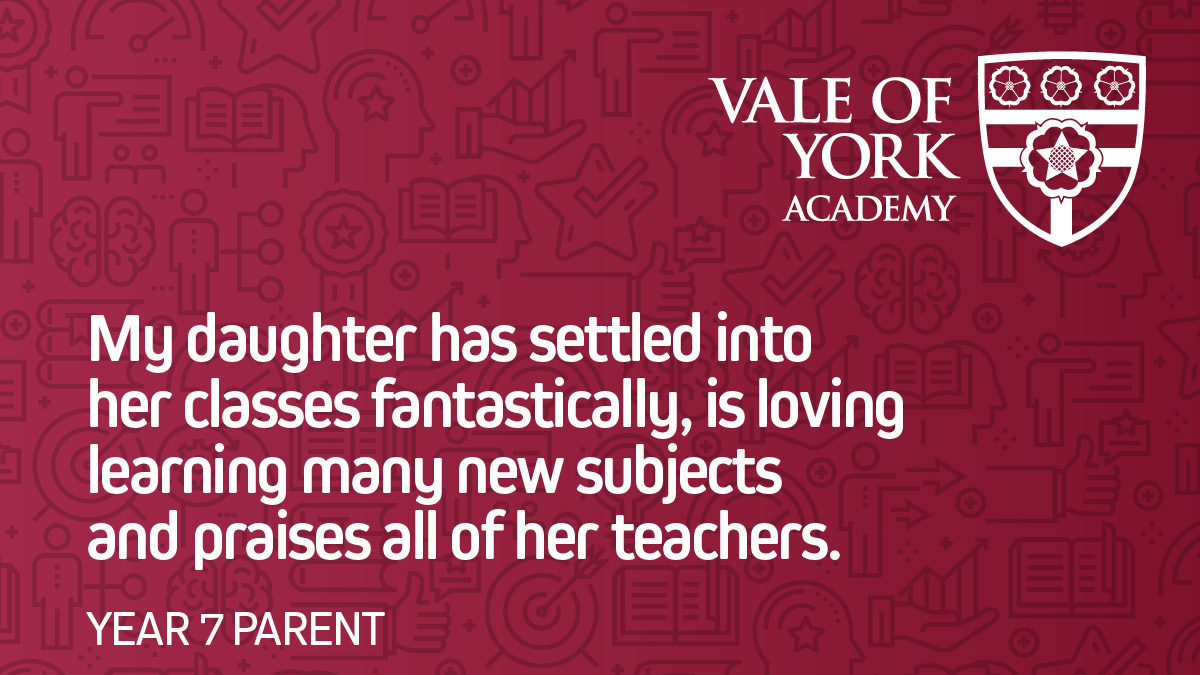 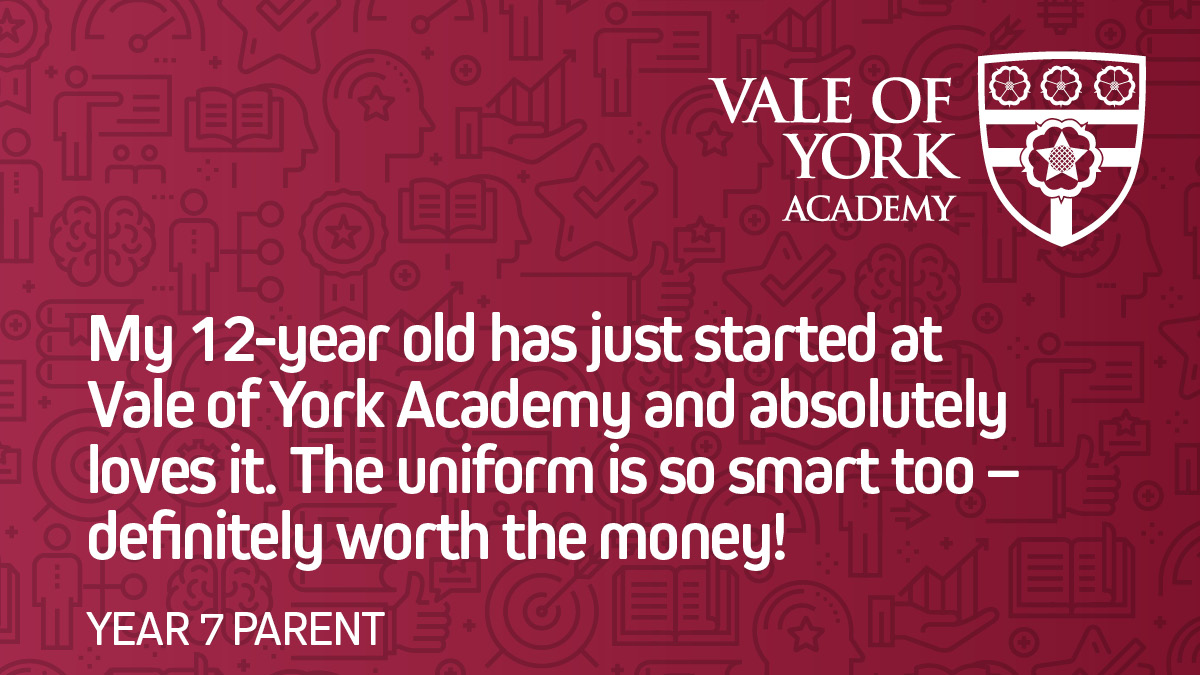 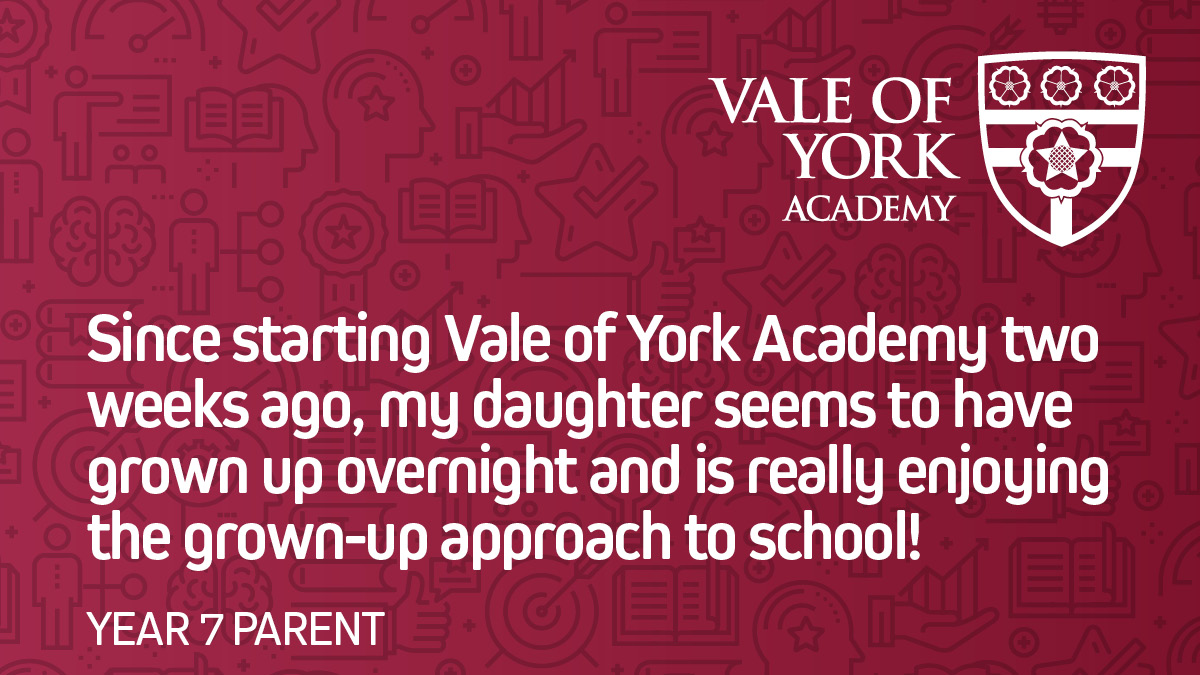 Below are a few more testimonials from parents of a current Year 10 student, Imogen; Holly, an ex-student who is now studying Medicine at Cambridge University; and mum of three, whose daughters have all been to Vale.

How Vale of York prepared our daughter for her next steps

“Holly left Vale of York in 2018 and has just started studying at Cambridge University, in fact as you read this it’s her first day (1st October 2020) reading Medicine.
Vale of York participates in York ISSP, this is a programme ran for bright state and independent school pupils offering the chance to learn and sit additional GCSE’s. Holly took Latin and Astronomy.
Holly received great support from her teachers at Vale Of York and her teachers had a huge impact on her achievements, for that we will be always grateful. In fact it has to be mentioned that 1 teacher, twice a week in his own time, offered Computer Science classes to interested pupils. This also allowed Holly to achieve an additional GCSE, along with the other students involved.
Holly was Head Girl and loved the opportunity to represent her school at open evenings and The Christmas fair. She even presented at the Lord Mayors’ Shine Awards which Holly herself had been awarded in previous years.
Holly also sat her A-level maths alongside her GCSE’s, this gave her the opportunity to then take a further 4 A-levels at Archbishop Holgate Sixth Form. She has 5A*s in: Maths, Further Maths, Biology, Physics and Chemistry.
During her time at Vale Of York Holly was extremely grateful to take part in a number of trips and field trips. The Year 8 French trip, the Sicily trip and the Geography field trip to the Peak District have left Holly with some wonderful long-lasting memories of her time at Vale Of York. Achieving Bronze and Silver Duke Of Edinburgh Awards made a great addition to Holly’s CV.
Choosing a Secondary School for your child is not easy. What I can say from our experience is that, if your child is happy at the school, wants to learn and works hard, Vale Of York will help them achieve their dreams. Holly achieved her dream.”
Michelle Cairns

“Our daughter, Imogen, is now in Year 10 and thriving within Vale of York Academy. Her start in Year 7 was definitely enhanced by spending a few days at Lakeside allowing her to bond with other children, get to know some of her teachers and challenging herself with the variety of activities.
As Vale of York Academy is a relatively small secondary school it allows her to benefit from teachers knowing her as an individual. In our opinion this is definitely helping her to reach her potential.
This has also enabled her to access fantastic opportunities in every year including entering an interschool speaking competition, being trained to be a girls active leader and co-hosting the most recent York Shine Awards. She has also really enjoyed after school activities, including netball, and had an amazing time on a school French trip.
She is currently fundraising to go to Morocco which is a wonderful opportunity that the school offer in partnership with Outlook Expeditions.
Through the school’s link with ISSP she has accessed masterclasses, exciting summer schools and is now studying Astronomy at GCSE level.
In our opinion this school is supporting our daughter to reach her potential for her as a individual as well as academically.”
Caroline Brown

Vale of York Academy is our local school so was the obvious choice for our three daughters.

Having had at least one child at the school for the last eight years, we have seen many changes, but they have all loved their time at Vale. The teachers and support staff are amazing, going above and beyond our expectations in so many different ways. The girls have had so many opportunities through school too, from trips abroad, playing sports, taking part in school performances, Duke of Edinburgh Awards to going on a self-funded trip to Morocco, they have made the most of everything.

Vale of York Academy was definitely the right choice.

Thank you so much to everyone involved with @ValeYorkAcademy for this amazing food collection to support our Food Hamper Project. This project supports our families in the community. For more information go to voy.hslt.academy/sup… Have a brilliant Christmas. pic.twitter.com/8dxH…

And a huge thank you to the local businesses who came along and made the Fair special with their wonderful products. And of course, last but not least our very own @ValeYorkAcademy students who do us proud every day of the week and had some fantastic stalls.

Well what an amazing night @ValeYorkAcademy 's Christmas Fair organised by our fabulous parent group @vale_society .Thank you so much to everyone that came, particularly Santa's Apprentices from @skeltonsch @cliftongreenps @BurtonG_Primary @LakesideYork ! Any pics, please tag us! pic.twitter.com/6R2I…

Vale of York Christmas Fair - TONIGHT!!!🎅 📅 Thursday 8th December ⏰ 6-8pm Link to raffle tickets and prize list: trybooking.com/uk/ev… We hope you can join us for some festive fun! pic.twitter.com/taiW…