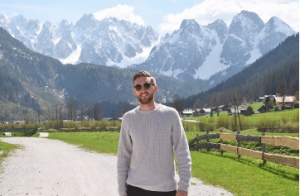 I left Canon Lee in 2010. After that I went on to do my A-Levels at York College where I also played for the Football Development Centre.

While at York College I had friends who were interested in going to America to continue playing football as well going to university. Although this was not my initial intention, I happened to be playing in a game which was being videoed and then sent to American coaches. It turned out that they liked what they saw and persuaded me to go to university in America over university in England!

One of the things that made this decision easier was that Liam Smallwood, who also went to Canon Lee, and Alex Boyes, another friend from York were also recruited to go play for the same school. I went on to spend four successful years playing football in America gaining various recognitions and captaining the side in my final two years. For anyone interested in playing college sport in America I would highly recommend it! You meet great people from all over the world and get treated like a pro; we would fly to games, stay in nice hotels, get loads of gear, all the games are live-streamed and the university covers all the costs. This is not just for football too, many colleges have tennis, golf, swimming, volleyball, track and field, and other sports teams that offer scholarships and the opportunity to study in a different country. Additionally, I was able to receive two Bachelors Degree in Business Administration and Accounting where I graduated Summa Cum Laude.

After I had graduated in America I wasn’t exactly sure what I wanted to do (so it is okay if they do not know yet!). With a desire to see some more of the world, my girlfriend and I decided to look into teaching jobs in Asia. We ended up getting really good positions at the same school in Shanghai, China. I ended up spending two years in Shanghai teaching English and Maths to second and third grade students (year three/four in England). This experience was amazing and also gave me the opportunity to travel around Asia and learn a second language.

I was also fortunate enough to play football in China for the Shanghai Cosmos and helped them to become very successful. We got promoted to the highest division in my first year, before finishing second and winning the cup in my second. I was able to leave my mark by becoming the first player to win the league’s player of the season in both the first division and premier division in consecutive years! Again, I would highly recommend both living and playing football in China, the city is truly amazing and I am really fortunate to have spent so much time there. I also adopted a dog while in China, which had seven puppies six days after adopting her (we did not know she was pregnant)! We found good homes for the pups, but ended up keeping one of them and have since flown back with them to America!

In the summer of 2018 I moved back to America with my girlfriend and our dogs as I was offered the opportunity to become the assistant coach for the football team I used to play for. One of the perks of this job is that the school is also paying for my Masters degree! So I am in my second season as a coach in America while also studying to obtain my Masters in Business Administration (MBA) degree which I will receive in the spring of 2020. I am also the technical director for the local football club in town, which is a great job to have as it allows me to combine both my business skills and football knowledge while helping the sport grow in the US.

Finally, myself and now my fiancé, started our own nanny referral agency business here in America which has so far been successful. We are also getting married next summer and out of my six groomsman four will be from Canon Lee, including my best man Jordan Bean, Jordan Phillips, Alex Ward, and Liam Smallwood.

Canon Lee provided me with some great friends, and although I haven’t really lived in England since I was 18 we are still like brothers and I am so grateful to be a part of a special friendship group. I have many amazing memories of my time there and hope the school continues to grow and be successful within the future.