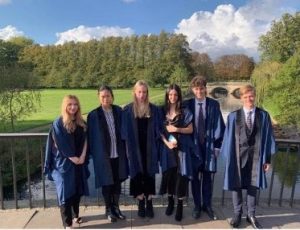 I was a loud and energetic toddler; I think my parents were quite thankful to be sending me off to Lakeside Primary School at the age of 4. At that point my cheeky smile and penchant for showing off became someone else’s problem. Although I showed modest early signs of an interest in academia (I am affectionately told I used to correct my Year 3 teachers’ Maths), at this point I was more concerned about how long it was until break time so I could play Princesses with my friends.

Vale of York (then Canon Lee) was an exciting fresh start. New subjects like Drama, Music and Separate Sciences gave me the opportunity to try these different things and to realise I was only really good at the latter. Nonetheless I enjoyed that, while my fate to be a scientist was written, Vale of York allowed me to continue Drama as a hobby through Drama Club and the school productions. In Year 8 I began studying GCSE Maths and when options came in Year 9, I chose Biology, Chemistry, Physics, History, Geography and French for GCSE alongside English Language, English Literature and Maths. VOYA also directed me into ISSP where I rounded my field of study taking masterclasses in Philosophy, Coding and Advanced Physics. It also presented the opportunity to study Latin and Astronomy to GCSE outside of school, along with Computer Science GCSE, which Mr Padgham (an absolute superstar) led as an afterschool club on Monday and Friday evenings.

During this time, I began participating in the UK Maths Challenge and have since competed in the Junior and Intermediate challenges moving into the follow up round, the Kangaroo, for both. I have also competed in the Girls Olympiad with a clean bill of Gold awards for all of the challenges so far. Curious to test my limits, in Year 10 I began studying A-level Maths; if anyone is interested, I can confirm those limits were in fact A-level Statistics which was a challenging and (much needed) humbling experience. In my final year, I became Head Girl and finished the year with 9 9s, 2 A*s and an 8 at GCSE (still annoyed about that last one but I suppose Doctors aren’t really affiliated with good English, I typed this for a reason).

I spent the next two Years at Archbishop Holgate’s Sixth Form where I realised my aptitude for Mathematics favoured a career in Accountancy, Tech, Banking or Insurance but regretfully my will to live did not. Thus, after some soul-searching, several months of work experience and volunteering, I had my Eureka moment and began the application process for Medicine at Cambridge. After a series of gruelling entrance exams (scoring in the top 1% of global applicants), interviews and arduous study sessions I was awarded a place to read Medicine at Gonville and Caius College Cambridge along with acceptances to the Universities of Edinburgh, St Andrews and Newcastle. Including the Maths A-level I sat while at Vale of York, I have 5A*s at A-level: Maths, Further Maths, Biology, Chemistry and Physics.

I am so grateful to the staff and teachers at Vale of York. I will always consider it the place I was made. If it had not been for the wonderful, individualist teaching style I experienced in my time there and for all the chances and opportunities I was given I am sure I would not be where I am now. When I think back to my time in school I fondly remember falling in the river on Geography field trip, singing on the bus during Duke of Edinburgh and loving every minute of my triple science class (although I feel l must confess that one time I said I had left my homework at home, I had, actually, just not done it). I feel I owe VOYA so much and I will always do everything I can to give back. This is a love letter to the place that moulded me; from a girl from Clifton, whose blazer never fit, whose parents never went to Uni, now at the forefront of global academics.