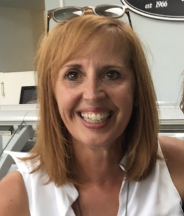 I left school on 22 May at the age of 15, wanting to go on to further education, ideally in catering but my parents wouldn’t allow it so stayed on at my Saturday job (Wishing Well in Market Street) which they increased to full time.

I worked for six months and joined the family start up business of Churchill’s Estate Agent as a Building Society cashier and then an administrator for the agency. I left there in 1985, joining an agricultural finance company, based in Piccadilly, called Grindlays Humberclyde. Over the next few years I progressed from an admin assistant in customer services to a PA to one of the Directors (who went on to become my husband).

I headed up the customer services department before leaving to start up the agricultural division of a Dutch bank, NMB which was taken over by the ING group. I continued there until I had my only son in 1994.

I studied CLAIT and accountancy courses at night school as I wanted my own business. In May 1998, I took over the ownership of my son’s day nursery which was based in Skelton. I renamed it Bright Beginnings.

Following on from my husband’s first heart attack I brought in a business partner and then moved the nursery to Rawcliffe Drive and one year later became a limited company. In June 2008, I started a supply agency which is still running (although I was bought out last year by the current directors). I have also started up a business cafe within the Eco Centre which I sold three years later and took over my late husband’s company when he passed away in 2011, which ceased in 2012.

I have been running the nursery for over 21 years and back on my own since my business partner retired in 2012. We have just been awarded outstanding by Ofsted and enjoy having students on placements from your school.

All this on five O levels and no university degree but a lot of hard work and professional development.