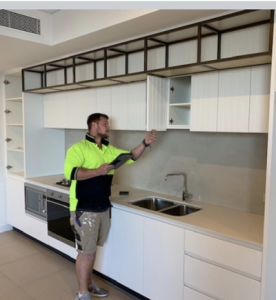 After Canon Lee I went to York College to study Uniformed Public Services, in which I got a distinction* but after David Cameron came into power as the new prime minister, he stated that they weren’t taking anyone on in the public sector for four years, so that shattered my dreams of becoming a police officer.

So I pursued my plan B which actually turned out to be the best decision I have ever made. I applied for a job as an apprentice joiner/carpenter at a York based firm called Peter Thompson. I completed a three-year apprenticeship as well as attending college once a week. After that I continued to work for the company for a further three years to gain more experience and knowledge. After that, I did some research into moving to Australia to better myself and that is what I did! I emailed a company called Topknot who sponsored me within a matter of days. I moved to Australia in August 2018 and have been working for this company as a carpenter/joiner. During this time I have managed to progress my skills and be appointed as site manager and I am learning new things every day. Also within this year I have managed to move into a penthouse flat and get engaged to my fiancée in a hot air balloon, life literally couldn’t be better and as much as I hoped to become a policeman in my earlier days I am very glad how life has turned out.

My best advice that I could give to the students at Vale of York is study hard and not because the teachers tell you to, but because when you achieve high grades it doesn’t help anyone but yourself. When you go to college you need a certain amount of grades to enable you to do the courses you want to progress in life, and without those grades you won’t be able to do the courses you have your heart set on. I was very lucky in getting the grades I needed to gain entry into the courses that I wanted to study, but some people on my course weren’t so lucky. They had to retake English and Maths at GCSE to get a grade c or above. This is not something you want to do as you’re not concentrating solely on the course you have taken and may have an impact on your overall performance.

Life is great when it’s a beach!